The IWINETC (International Wine Tourism Conference) delegates are in for a treat when they visit Torres Winery at Pacs del Penedes, Catalunya on April 6th 2016, where a Wine Tour and Gala Dinner is being organised for them as a part of the IWINETC Networking Program. Torres is one of the Gold Sponsors of this prestigious event; the initiative of Barcelona based Englishman Anthony Swift. I have experienced the legendary Torres hospitality first-hand and can say without doubt that it is really the best.

A meeting with Miguel Torres Maczassek in June 2015 during Vinexpo at Bordeaux France resulted in my visit to Bodegas Torres near Barcelona. He extended me an invitation and there was no way I was going to refuse, as I am a huge fan of the highly rated Torres Wines, which are very popular in India. Their easy drinking approachable wines are a great value for money and most important of all, the fruit forward style matches well with spicy Indian cuisine.

It was Sumit Sehgal of Prestige Wines & Spirits (Importers & Distributors of Torres Wines in India) who co-ordinated my trip to Bodegas Torres, 60 kms west of Barcelona, on 12th October 2015, which happened to be a public holiday in Spain. But that wasn’t the reason why the Torres Visitor’s Centre was bursting with people. I was told that this was the norm on working days too, as Torres Winery is one of the most visited wineries in the world. Its proximity and easy connectivity to Barcelona makes it an ideal destination for a day-trip.

With Miguel Torres Maczassek CEO of Miguel Torres, S.A. in Bordeaux & some pictures of my visit to Bodegas Torres near Barcelona

My visit began with a short film on the history of the Penedes based, family owned Bodegas Torres, which was founded in 1870. This Spanish wine giant owns vineyards in 8 different appellations of Spain and also produces wines in Chile and California. 70% of the company’s turnover is made up of exports and India is one of the 140 countries where Torres sells its wines. The film throws light on Torres commitment to environment and their efforts to reduce CO2 emissions at the winery by 30% by the year 2020. They have stopped using pesticides and run a program to recover and preserve ancient Catalan grape varieties in the danger of extinction.

While taking a mini-train tour of the sprawling winery, set in the midst of vineyards, I could see how serious the Torres family is towards respecting nature. A lot of buildings had solar panels pointing towards the use of renewable energy. I saw a huge water recycling plant and noticed that though the various buildings at the winery had a modern contemporary design, they were in complete harmony with the natural surroundings. The artwork scattered around the winery complex adds a touch of aesthetic. It truly is one of the most innovative and advanced wineries in Europe.

The mini train took us around the property, through the vineyards, past the cellars and the winery. Even though I enjoyed the tour immensely, I felt it lacked a personal feel and was a little bit industrial. But I guess that keeping in mind the huge volume of visitors; this is the most efficient way to show people around in the shortest possible time. 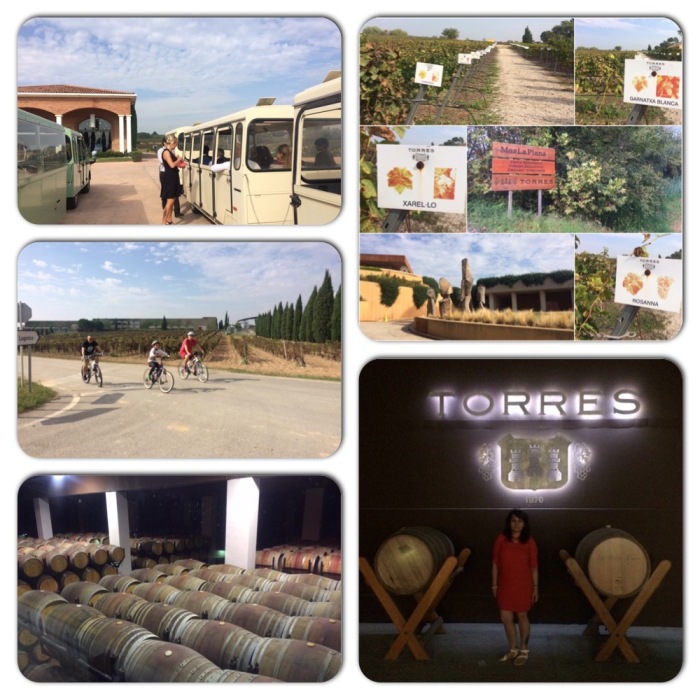 The tour lasted nearly an hour & ended at the spacious tasting room where I got a chance to try out a few of the 50 odd wine brands that Torres sells. Among these was Fransola, a refined single vineyard Sauvignon Blanc ; Milmanda, a 100% oaked Chardonnay; the ever popular red Sangre de Toro and Gran Muralles, an intriguing high end blend which features the nearly extinct ancient Catalan varietals Garró & Samso. And of course the most prestigious wine from the Torres portfolio, the single vineyard 100% Cabernet Sauvignon Mas la Plana, of which I purchased a bottle before leaving the visitor’s centre. A knowledgeable & welcoming staff at the tasting room makes the whole experience of trying out the wines educative as well as pleasurable.

Since the much awarded Mas Rabell restaurant at the winery was closed due to a public holiday in Spain on the day that I visited, my lunch was organised at La Vinoteca Torres at Passeig de Garcia in Barcelona. Visitors to Barcelona must check out this place and try out any wine from the Torres cellar which is served by the glass along with some delicious tapas showcasing Spanish gastronomy. The diversity of range & myriad styles, from simple mass-market wines to luxurious single vineyard cuvées, is mind boggling indeed. Torres lives up to the motto of “making wines which reflect the personality of each vineyard”

I would like to end by saying it yet again that there are very few wine companies whose hospitality can match that of Bodegas Torres. Their commitment to ecological and social causes through the Miguel Torres Foundation makes this largest winery in Spain, the most admired wine brand in the world. I am looking forward to visiting Bodega Torres once again during the upcoming IWINETC 2016 and writing more about their wines.

To read more about Miguel Torres, S.A here is the link to an earlier article I had written on Bodegas Torres

Like Loading...
‹ A day at Fratelli Vineyards during Harvest
Greek Winemaker Vangelis Gerovassiliou and his award winning wine Malagousia ›