The Stunning Wineries of Rioja Alavesa in Spain’s Basque Country

As one drives past the village of Samaniego towards Vitoria-Logroño, in the Álava province of Northern Spain’s Basque Country, what is noticeable from the road is a gigantic ultra-modern glass box sitting atop a small hillock amidst a sea of vineyards.

One stops and gazes in wonder at this towering glass facade that is Bodegas Baigorri, a winery designed and built by local Basque architect Iñaki Aspiazu.

The actual winery stretches 7-stories underground. The entire wine-making operation here is based on vertical and gravity method that can be viewed from one floor. The result is world-class modern wines with a distinct personality.

Bodegas Baigorri is just one of the several stunning wineries of Rioja Alavesa, that I visited as a delegate of the Annual International Wine Tourism Conference (IWINETC) held in Vitoria-Gasteiz, Álava, Basque Country, Spain in March 2019.

Rioja Alavesa is an area north of the River Ebro on the southern limits of Spain’s Basque country and one of the three broad sub-regions of Spain’s most famous wine region, Rioja.

It is not only the smallest sub-regions of Rioja but also the wettest and coolest, with a unique micro-climate. The wall of rocky Cantabria mountains protects the area from the harsh winds blowing from the Atlantic Ocean.

The other two sub-regions of D.O Rioja are Rioja Alta and Rioja Baja. Tempranillo wines dominate the landscape here. It is a region where you can combine nature, gastronomy, tradition and wine.

Rioja Alavesa is dotted with wineries that boast cutting-edge architecture and are a mix of tradition with modernity. They are owned by small family winemakers and also large producers. It is a unique combination of wine and architecture, in a region where the culture of wine permeates everything.

Marqués de Riscal, located in the village of Elciego within the Rioja Alavesa sub-region, was ranked number nine in the inaugural World’s Best Vineyard Awards and number 6 in 2020, to honour the finest in modern wine tourism.

Founded in 1858, Bodegas de Los Herederos del Masqués de Riscal is one of Rioja’s oldest wineries. A fusion of old and new, it features a futuristic hotel designed by the legendary Canadian-born American architect Frank Gehry, designer of Guggenheim Museum in Bilbao.

The eye-catching colourful ribbon-like curves of the hotel made from twisted titanium and stainless steel sheets are in hues of pink, gold and purple, to match the colour of wine.

This iconic hotel connected to the winery, is one of the most recognisable buildings of Rioja, Spain’s flagship wine region. It is a huge tourist attraction, where along with great wine, you can try out gourmet food at the on-site Michelin star restaurant.

Another stunning winery located in the foothills of the Sierra Cantabria in the Basque town of Laguardia is Bodegas Ysios. This avant-garde boutique winery designed by the famous Spanish architect Santiago Calatrava was founded in 2001. 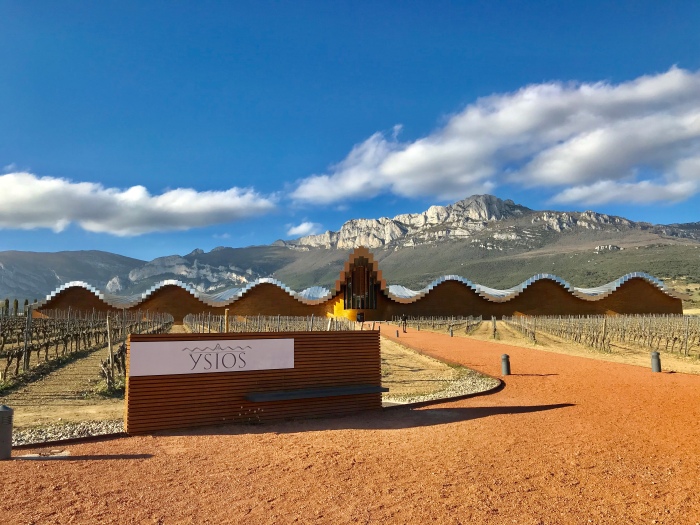 The dazzling wave-like structure with its rolling contours integrates seamlessly into the surrounding landscape, with the Sierra Cantabria acting as a picturesque backdrop. The winery design, which mirrors the undulation of the Cantabrian mountain ranges, is in complete harmony with nature.

Located just outside the old town of Laguardia in the heart of Rioja Alavesa is Eguren Ugarte, a family-owned winery founded in 1870 by Vitorino Eguren.

What is fascinating about this winery is the ancient underground 2,000 metres cave complex cut into rocks. This is where the patrons of the winery keep their personal stash of wine.

Their signature hotel, Eguren Ugarte, located within the winery grounds, is the first of its kind in the Rioja Designation of Origin to be awarded the Calidad Turistica.

Yet another spectacular winery worth checking out is Viña Real located in Laguardia at the top of Cerro de la Mesa with a fantastic view of the valley below. It belongs to Cvne Group, one of Spain’s most important wine groups. The brand Viña real was created by Cvne in 1920 in recognition of Rioja Alavesa wines

The winery, in the shape of a gigantic fermenting vat, was designed in 2004 by the Bordeaux based French architect Philippe Mazières.

Bodegas Solar de Samaniego located in Ebro Valley in the heart of Rioja Alavesa is a winery that has restored its seventies architecture to become a space where the cultures of wine and literature fuse together.

The unused old wine tanks inside the winery are painted with impressive murals by the Australian artist Guido Van Helten, known for his photorealistic murals. All these are a great representation of the Álava wineries.

The short distances between the medieval Basque towns of Samaniego, Laguardia, Elciego and Labastida, that form a part of the Rioja Alvesa Wine Route, allows easy access to the stunning landscape of avant-garde wineries and hotels.

The wineries designed by the world’s leading contemporary architects such as Calatrava, Gehry and Aspiazu are huge tourist attraction. These architects have left an indelible mark on the Rioja region by creating these new cathedrals of wine.

The beautiful Basque villages and towns with medieval fortresses, renaissance, baroque and neoclassical palaces have traditional links with a wine culture that is visible everywhere. These villages have massive underground cellars or “calados”, where wine is still made in a traditional manner, especially in Laguardia.

They are also home to the world-famous Basque cuisine, a priceless heritage and distinguishing feature of this unique region that has remained faithful to its roots even while innovating.

The Rioja Alavesa Wine Route offers you a chance to delve into the culture of wine in these medieval villages. There are various agencies that offer customised packages for individuals, families and companies tailored to your needs, whether you are a wine and food lover or an avid traveller looking for authentic experiences.

The closest airport is located around 120 km north of the Rioja Alavesa region, in the industrial port city of Bilbao.

So take a break from the usual places like Italy and France whenever the travel restrictions are lifted and head to the Basque country in Northern Spain.

Like Loading...
‹ India Wine Awards 2019: How Relevant Are They?
A Beginner’s Guide to Choosing a White Wine ›