Guppy by ai : Summer Menu to beat the heat.

In this relentless heat, with the scorching sun beating down on us, all one craves is some refreshing and cooling food. What better cuisine to try out than Japanese, which has been scientifically proven to combat fatigue caused by the ravages of summer. And what better place to try it out than at the breezy, funky, colorful restaurant, Guppy by ai, located at Lodi Colony Market.

Seasonality of food or “shun” is the key stone of Japanese food culture with food being an indicator of seasons in Japan and seasonal produce playing an important role in most dishes. Come summer and it’s time for Hiyashi Chuka, Somen (cold noodles) Mizuna (Japanese mustard) Okra, Tofu, Unagi (eel) foods well known for their cooling properties in countering the heat. They have all been incorporated in the new summer menu at Guppy by ai, by Chef Vikram Khatri. A few days back I was invited to try it out.

I began my meal with Sakura Wood Smoked Pumpkin Soup (Rs 250). Sakura is a Japanese cherry blossom tree which, contrary to common misconception, does not bear any fruit and produces only soft pastel pink blossoms during spring. Chef Vikram uses hot and cold smoking techniques, using the wood of Sakura trees, to impart a slightly peaty flavor to this very lightly seasoned sweetish soup. A big change from the umami flavours of Japanese miso soup that we have all got accustomed to.

Seaweed & Mesclun Salad (Rs 450) comprising of Mizuna (Japanese mustard greens) Tosaka (Seaweed) and baby greens served with house made plum vinaigrette came next. Though the greens were a little wilted due to the heat, the seaweed provided a delightful crunch.  It is the presence of five colours red, white, green, black and yellow, which are always visible in the arrangement of a Japanese dish that fascinates me. I was told that they represent vitamin & mineral content e.g. red for Vitamin A, yellow for vitamin C etc. 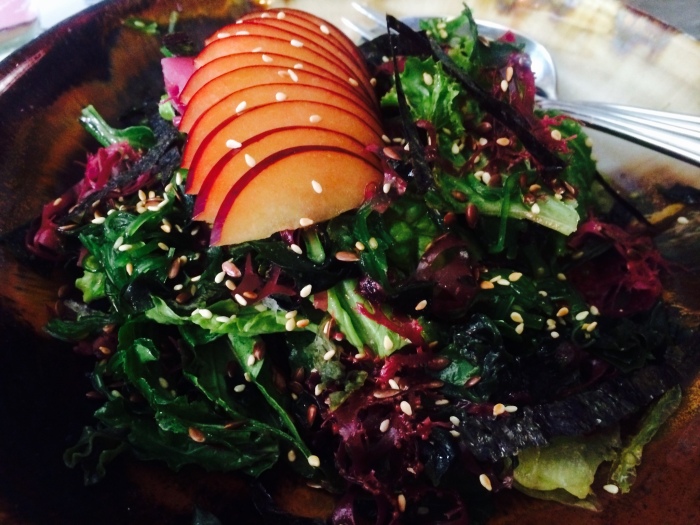 The next dish was Tofu & Water Chestnut Motoyaki (Rs 400) Motoyaki is a style of cooking involving baked food, usually leftovers, topped with a mayonnaise. In Japan Oyster and Seafood Motoyaki are quite popular. Here Chef Vikram had used silken Tofu, a “yin” food known for its cooling property as it moistens and increases fluids in the body. The bright red color of the dish contrasting against the white porcelain showed the thought which had gone behind the presentation of each dish, how it was chosen for its feel, contrasting colors and textures. 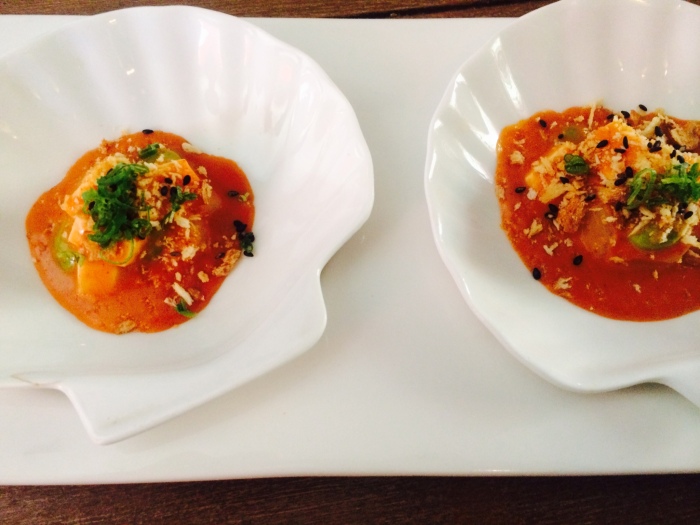 Salmon Tartare (Rs 850) with fresh avocado was served on wafer thin cucumber slivers with tobiko (flying fish roe) and bonito mayo. Organic Blue chip sashimi grade Scottish Salmon was used for this dish. It looked so beautiful that I was confused whether to eat it or just admire it.

Assorted Vegetable Tempura (Rs 500) batter fried seasonal & exotic vegetables served with ginger dashi were next. I enjoyed trying to decipher the different vegetables used in this dish. There was okra, a popular summer vegetable in Japan, coconut, onion, burdock root & kelp. Umami rich dashi lies at the heart of Japanese cuisine as it forms the base of soups, sauces & dressings and adds a savory depth to the dish. It is a combination of Kombu (edible kelp) bonito (dried fish) and water. Shitake-kombu dashi is used for vegetarian cuisine. It is how Chef Vikram uses dashi which sets him apart from other chefs, like this ginger dashi with green tea salt which he served with the tempura. 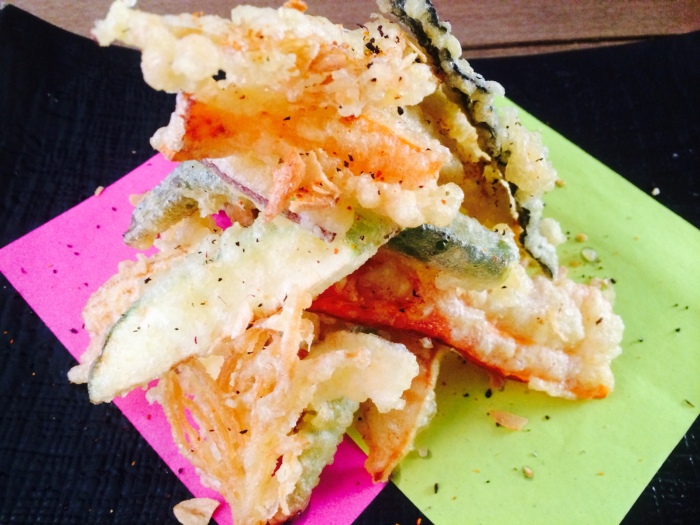 Cold Smoked Kampachi Sashimi (Rs 1400), cured and smoked yellowtail served with yuzukosho (paste made from chili peppers, yuzu peel and salt) and soy ponzu followed the tempura. Since sashimi is eaten raw, the fish must be of as fresh as possible. Even though there was nothing wrong with this dish, I will avoid ordering it during peak summer in a place like Delhi where there cannot be complete guarantee of freshness. 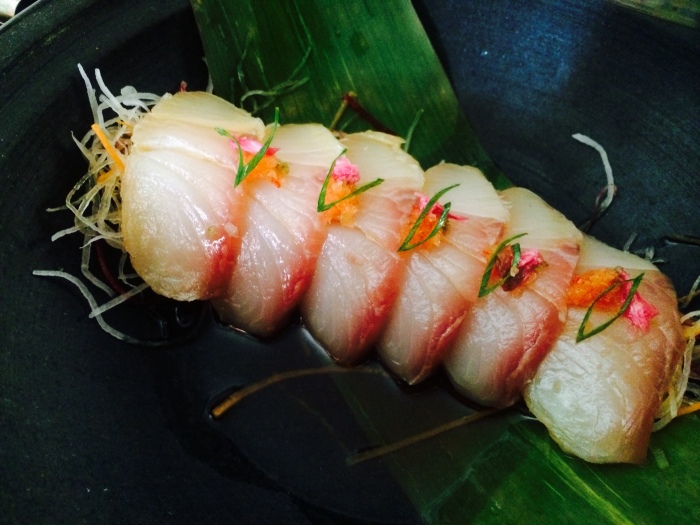 The Nigiri (each piece priced at Rs 250) was first-rate. Each hand molded portion of cooked vinegared rice was topped with the best cuts of Tuna, Salmon, Yellowtail and Aburi Salmon, a dab of wasabi placed between the rice and the topping. I was told that Nigiri-sushi is usually eaten with hands in one bite. Soaking the sushi in soy sauce is disrespectful as it implies that the original flavors are not good enough and in case you do need to soak it, then it should be placed upside down and eaten “rice-side up”.

The Futomaki Sushi Rolls (Rs 1200) with fresh salmon, tuna, tamago (a type of Japanese omelette) and crab were a little too unwieldy for my liking, though they are a very popular item on the menu.

Eel Yanagawa Fu (Rs900) braised Japanese eel with egg on a bed of burdock root and seasonal grilled vegetables, an interesting dish which felt more like comfort food as it had a home cooked feel, both in taste and presentation. Unagi or eel is the uncrowded emperor of Japanese summer food as it is loaded with omega-3 fatty acids and vitamin B which give a big boost to the body fatigued by the heat and help in stimulating the metabolism.

Parchment Baked Market Fish (Rs 900) came with a lot of fanfare and the whole process of cutting open the paper was similar to an elaborate Japanese tea ceremony. The fish is changed daily as it features the catch of the day, whatever is available in the market. This was one of my favorite dishes of the entire meal. Frugality and minimalism, which are the hallmark of Japanese cuisine, was so evident in this dish.

The dish which I enjoyed the most was Hiyashi Chukka (Rs 850) chilled ramen noodle topped with prawn, crab stick, fresh cucumber and wakame seaweed, served with sesame flavoured vinegar soy broth. A great meal in a bowl. Cold Soba, though good any time of the year, provides refreshment particularly during summer.

The meal ended with Macha Pudding made with green tea and served with house made toffee sauce. Macha is the only tea where you ingest the leaves in a powdered form. It is packed with more antioxidants than any other “superfood” and its health benefits are extolled in every health journal. Knowing this made me feel less guilty while polishing off this delicious dessert.

The summer menu features some great summer cocktails too like Plum Blossom with sochu, lime and plum schnapps, Gooseberry Fizz, Okinava with sake etc. The one that I tried was a concoction made with Beer. 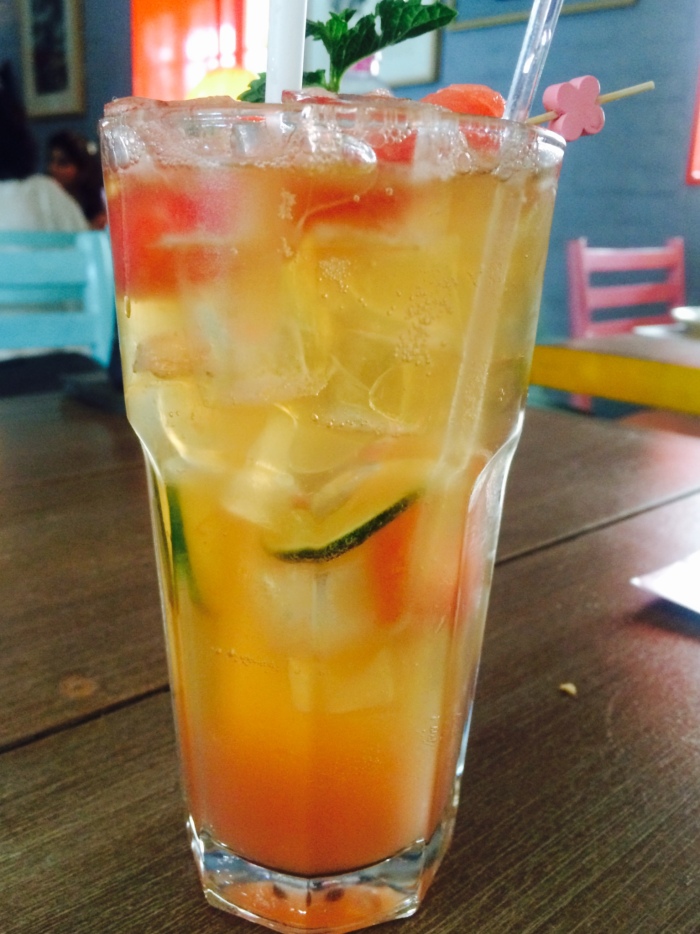 So eat your way through some cooling Japanese food to beat the heat.

All photographs used in this review are clicked by the author.