Winter Menu at Guppy by Ai : Looking beyond Sushi to Traditional Japanese Dishes

Japanese food is not just about raw and cold dishes. To delve deeper into this cuisine, all you need to do is have a meal at Guppy by Ai, the trendy little restaurant at Lodi Road owned by AD Singh of Olive fame. The New Winter Menu at Guppy is replete with warm comforting soups, piping hot curries and traditional one pot dishes, which are a complete meal in themselves.  As India’s fascination with Japanese cuisine is growing, so is the willingness of Chefs to experiment with dishes hitherto unheard of. They are willing to move beyond the regular fare of sushi & sashimi and play with ingredients and flavours, both familiar and unfamiliar to the Indian palate.

One person who is at the helm of this movement is Chef Vikram Khatri, a chef who has won many awards and accolades by  setting a very high standard for Japanese cuisine in India, at the same time making it more approachable. Out of all the cuisines in the world, it is Japanese cuisine which is most chef driven as there is a lot of emphasis on artful presentation and skilful precision. Chef Vikram is a master artist with a deep understanding of the philosophy behind Japanese cuisine which he is able to convey through his food as he has the requisite knowledge, expertise and the finesse required to execute his vision.

In the winter menu at Guppy by Ai, which has been introduced for the first time, Chef Vikram has come up with some interesting dishes which are appropriate for the cold Delhi winters. I got a chance to try them out when I was invited there for a meal. The three hour long epicurean orgy began with an amuse bouche Danshaku Furikake which is deep fried potato spirals sprinkled with Furikake seasoning made up of dashi, sea-salt and nori, a spice mix traditionally sprinkled on top of rice. This was served with a drink made of tomato and jasmine tea. Now that the taste buds were sufficiently tickled began the onslaught of starters and mains. I will stick to writing about the stand-outs for me and re-live the meal experience.

First the soup, a vital element to any Japanese meal and usually served before the entrée. Miso soup, in fact, is a central dish of a traditional Japanese breakfast as it is full of health benefits including serving as a cure for a hangover. We were served a “Dubin Mushi” inspired Chicken Suimono (Rs 350) which means “things to sip”. Dubin Mushi is a traditional sea food broth served in a Dubin which is a tea pot. Here the sea food was substituted by a warm, comforting clear chicken soup served with miniature root vegetables and chicken dumpling. A simple soup with delicate flavours presented in a beautiful manner, with the fragrance being released as the lid was lifted from the bowl. I always maintain that it is the simplest dishes which are the hardest to master as it is tough not to go overboard with the seasonings. I loved the fact that the miniature carrots and radish retained the right crunch and bite and the soup had that slight salty and meaty “Umami” flavour which we equate with Japanese food. The vegetarians have the option of going for the Mushroom Suimono.

Among the starters the Crispy Soft Shell Crab (Rs 990) was delicious. This was a tempura style dish served with wasabi mayo. Crunchy and light with the thinnest coating of batter it made a great appetizer. Tempura was introduced in Japan by the Portuguese and is considered a tricky technique as it is so important to get the right consistency of the batter to make it crispy and the temperature of oil for deep frying has to be spot on. Chef Vikram has mastered it to perfection. 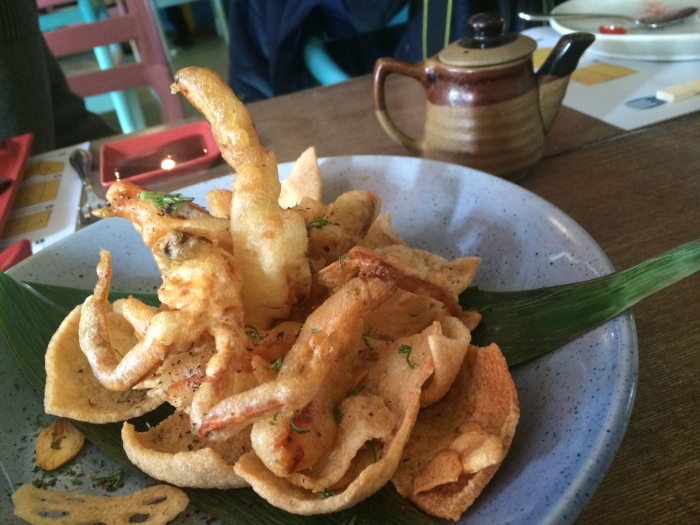 Chicken Katsu Curry Rice (Rs 1050), a panko crusted chicken cutlet served with Japanese curry and steam rice, was another dish which impressed me. It is what I would call “the perfect comfort food” The chicken was crunchy on the outside while the meat was succulent and juicy. A little bit of research revealed that Japan’s national dish is not sushi but curry rice (kare-raisu). An integral part of Japanese home cooking this is not found on the menu of most restaurants, but in specific curry houses. It was introduced to Japan by the British during the Meiji Era (1868-1962) who were also administering India at that time and were clearly inspired by its culinary traditions. So basically it resembles an Anglo-Indian curry made with a ready-made mix of spices, the “curry powder” and something which the Indian palate is used to. This dish is eaten with a spoon and not with chop-sticks even in Japan.

For the Vegetarians there is  Nasu Dengaku (Rs 750) inspired aubergine. The eggplant is grilled and slathered in a coating of sweet and sour miso sauce with the skin kept intact to help the aubergine retain its shape.

Among the rice and noodle dishes are Mushroom Takikome Rice (Rs 700) which is akin to a Japanese risotto or our Indian “Khichdi”. This is a traditional Japanese rice dish cooked in stock along with a variety of seasonal ingredients. The Chashu Ramen Miso (Rs 900) is another interesting dish on the winter menu of Guppy by Ai. Chashu means pork and the name is derived from the Chinese char siu or roast pork. The Japanese version is made by simmering pork in sweet soy and mirin sauce. At Guppy by Ai they simmer it for 72 hours.

A common refrain that one hears is that the food at Guppy is overpriced. But that is true of Japanese restaurants all over the world. The ingredients used like miso paste, dashi, wasabi, fresh fish, sushi rice are all imported which adds to the cost of a dish.  One of the reasons why I am fond of Japanese cuisine is that is extremely healthy and not loaded with calories. Unless one indulges in the sinfully decadent Red Velvet Cake at Guppy.

Chef Vikram Khatri calls his cuisine contemporary Japanese. Now with the addition of some traditional elements he has expanded the array of choices for the people of Delhi where Japanese food is concerned. It is the right weather too for trying out that hot steaming bowl of Chashu Ramen Miso. And if that does not sound appetizing, there is always the Pork Belly to try out, a dish which has been elevated to cult status by Chef Vikram.  Douzu Meshiagare or Buon Appetito as they say in Japanese.

Like Loading...
‹ Spanish Wines and the towering figure of Miguel A Torres
Chateau Malartic Lagraviere : A Gem in Pessac Leognan Bordeaux France ›