The taste of Château Gruaud Larose 2000 still lingers on my palate even though more than fifteen days have passed since I first tasted this stunning Bordeaux wine. Complex and elegant with silky smooth tannins, a quintessential St. Julien with notes of tobacco, chocolate, cassis, liquorice and earth, a wine which has supposedly hit full maturity but is “nowhere near its last legs” and is good for another 20 to 30 years in the bottle.

Yes, such is the beauty of Bordeaux wines which are structured to age for decades and command some of the highest prices in the world. I got a chance to taste some outstanding vintages of Château Gruaud Larose, a well-known second growth producer in the St. Julien appellation of Bordeaux, at a wine dinner organised by Rajiv Kehr, a wine connoisseur and expert and the only Indian to be a member of the exclusive club of Burgundy wine enthusiasts, Confrérie des Chevaliers du Tastevin.

The vintages were chosen by Rajiv Kehr and David Launay, Sales Director at Gruaud Larose, for their maturity and ability to shine with food, which they did. The fact that all the bottles for this event were “Ex-Château”, meaning wines sourced directly from the chateaux, made it all the more special. 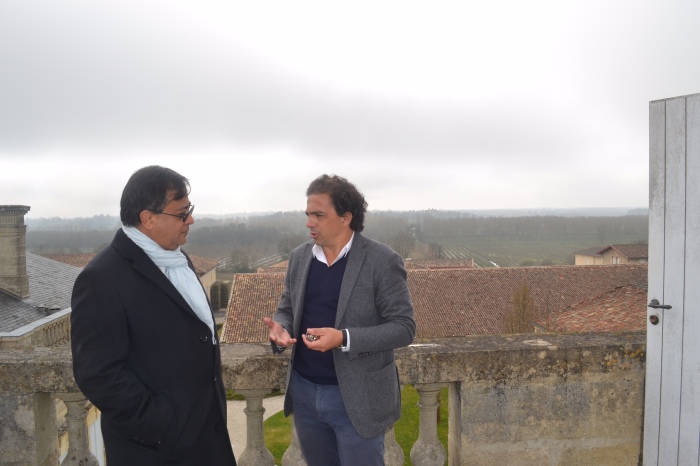 Occupying the highest point of elevation on the St Julien plateau, Gruaud Larose, is unique as it is one of the largest vineyards in Bordeaux, that is in one single bloc which has remained unchanged since it was classified as one of fourteen Deuxièmes (Second Growth) in the original Bordeaux Wine Official Classification of 1855. Joss Fowler, director of Fine & Rare Wines calls the wines “solid” in terms of style and quality, combining the power of Pauillac, the perfume of St Estephe and the elegance of Margaux.

The wine is a blend of Cabernet Sauvignon (65%), Merlot (25%), Cabernet Franc (8%), and Petit Verdot (2%), an approximate ratio which keeps changing.  The fact that Gruaud Larose has “yet to catch the eye of the investment market” has meant that the prices have stayed reasonable. Enthusiastic collectors can still buy afford to buy them and one can order these at top restaurants even in India. And fortunate souls like us can have the pleasure of tasting them at events like the one organised by Rajiv Kehr.

The men who made it happen Rajiv Kehr, David Launay & Sanjay Menon

The sit down dinner began with the Château Gruaud Larose 1998 & 2003 paired with a slow cooked pork belly with seared tuna and pink peppercorn. What struck me immediately were the surprisingly polished tannins and the rich earthy characteristics of the vintages.

The next course of Spinach ravioli, fracassee of morel and chanterelles with tarragon, paired with Chateau Gruaud Larose 1989 and 1996, was brilliant. Two outstanding vintages combined with perfectly made ravioli taken to culinary heights with the addition of morels and easily the most innovative pairing.  The 1996 vintage was medium to full-bodied with berry and cedar notes, great for drinking now but with another decade still left in it.

It was, however, the 1989 which seemed to be everyone’s favourite. A medium bodied enticing and decadent wine with velvety tannins and unmistakable Bordeaux aromas of black currant, cassis, leather, tobacco and smoke.

The next course of slow cooked lamb rack with braised French puy lentils was paired with Chateau Gruaud Larose 2000 and 2009, a pairing which is often described as a “no brainer” as it a combination made in heaven. The quality of the Australian lamb was excellent though for me the addition of the lentils took away a little from the dish.

The 2009 has been given 95 points by Robert Parker and was indeed a generous and rewarding wine, but the 2000 vintage was my favourite. A word about the dessert, an 8 layered chocolate cake served with Baileys gateaux and tonka bean milk, “simply delicious”. Hope it is on the menu at La Riviera because this is one dish that I will be going back to the restaurant to try out again.

The evening ended with the majestic Louis XIII de Rémy Martin, described as “one century in a glass”, a legendary cognac blended from 1200 Grande Champagne eaux-de-vie (water of life) aged between 40 and 100 years and packaged in a stunning Baccarat decanter. It is one of the most expensive bottles of libation in the world, costing upwards of $3500 per bottle and yes we were lucky to imbibe more than a few drops of this precious liquid. The Regional Director of Louis XIII, Christophe Bourrie, had flown in from Singapore to do the honors of opening a bottle and having it served to the guests present.

The best part about the event was that it was not at all intimidating and haughty as a lot of wine events can be. The hosts took turns to mingle with all guests, switching tables after each course and encouraging every one present to voice their opinion. The wines lived up to the Chateau Gruaud Larose motto of Le Vin des Rois, Le Roi des Vins (The Wine of Kings, The King of Wines).

Lastly, Chef Tanveer Kwatra created dishes which showcased his command over cooking techniques and complimented the wines very well. The crowning glory was of course Louis XIII, which merits a separate article.

To read more on Bordeaux Wines click on the following link